Psyched Out by Kelly Patricia O'Meara 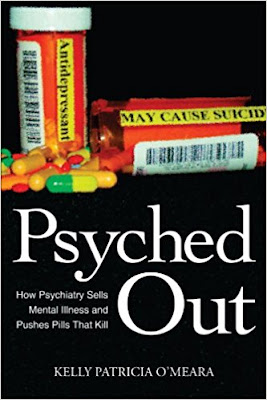 Few would argue that people suffer from mental illness, mental breakdowns, depression or any number of adjectives that describe behaviors that adversely, even severely, affect people's lives. In law it is said that "it doesn't matter what one believes, only what one can prove" The same can be said for psychiatric diagnosing. It matters little what anyone in the medical/psychiatric community "believe" is the cause(s) of mental illness. The question that has not been answered is whether tens of millions of Americans who have been diagnosed with any one or number of psychiatric mental disorders suffer from a mental "disease" - an objective, confirmable abnormality of the brain. What is known is that neither the American Psychiatric Association nor the National Institute of Mental Health, nor any other medical organization, is capable today of making available scientific evidence to prove that any psychiatric disorder is an objective, confirmable abnormality of the brain.
This mantra is repeated throughout the book because it is the point of the book. That people are suffering isn't in question. Whether they actually suffer from a psychiatric disorder that is a known objective, confirmable abnormality of the brain is in question because selling mental disorders as "disease" such as the theoretical chemical imbalance, has become the norm in the medical/psycho pharmaceutical Community and it is blatantly false. The People, if given the truth, can take it. The decision to accept the psychiatric diagnosis and seek treatment with psychiatric mind-altering drugs may be no different, but at least the decision will be based on all the truth, the objective confirmable scientific evidence, not theories, wishful thinking, deceptive advertising and misleading advocacy group, pharmaceutical company and government-sponsored information campaigns.

Currently an investigative reporter with the Washington Times, Insight Magazine, covering issues such as, corruption in the L.A. Courts, the connection between Ritalin and school yard shootings, and several articles on TWA 800.
In September of 1997, O’Meara ended a 17-year career on Capitol Hill, having served four members of Congress. During her tenure, O’Meara spent more than six years investigating the gunshot death of a Marine in El Salvador.The investigation took O’Meara into the unfamiliar territories of forensic pathology and ballistics. She arranged for and attended the exhumation and autopsy of the deceased more than two years after his death and participated in numerous ballistics tests. Based on the physical evidence uncovered during her investigation, the Department of Defense changed their original determination of the cause of death from self-inflicted gunshot wound to "undetermined" – a ruling of immense importance to the young man’s parents.

As Administrative Assistant to Michael P. Forbes (then R-NY), O’Meara was charged with investigating the circumstances of the tragic explosion of TWA flight 800. Shortly thereafter, O’Meara left Capitol Hill and joined Emmy award winning producer, Kristina Borjesson, to produce a 15-minute segment for an ABC news magazine television show, Declassified. Production came to a halt in August of 1998 and the show was canceled by ABC months later.
O’Meara took advantage of an internship with the National Journalism Center in Washington, D.C. There she researched and wrote a groundbreaking investigative piece on money laundering during the ’96 presidential election, then accepted a position with Insight Magazine. http://flight800.org/eye_omeara.htm