Protest against coercion in health care in the Netherlands. 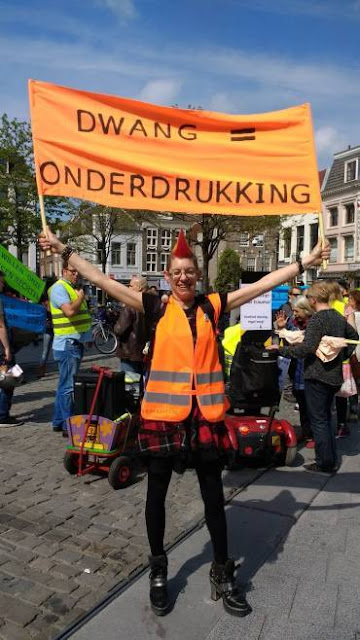 European Network of Ex/Users and Survivors of Psychiatry


News from Members: Protest against coercion in health care in the Netherlands.
A protest march against coercion in psychiatry was held in the city Utrecht, the Netherlands, on Saturday afternoon, 6 May 2017. The protest was organized by Mind Rights, Enik Recovery College and Mad Pride Nederland. The protest in Utrecht was dedicated against coercion in mental health care, and especially against the law proposals which facilitate coercion.
The colorful group marched through the city of Utrecht, and ended at Mariaplaats, where Member of Senate Marleen Barth (PvdA) had arrived to receive the protest-message of the group. "I don’t have an opinion yet, but I am reading the law proposals," she said.-"There will be an expert meeting first, for which Jolijn Santegoeds has also been invited, and then the Senate will ask questions to the cabinet."
See more at http://enusp.org/…/news-from-members-protest-against-coerc…/
alle giovedì, maggio 11, 2017