SURVIVORS OF PSYCHIATRIC DRUGS: THE FACES OF IATROGENIC HARM -- Karen 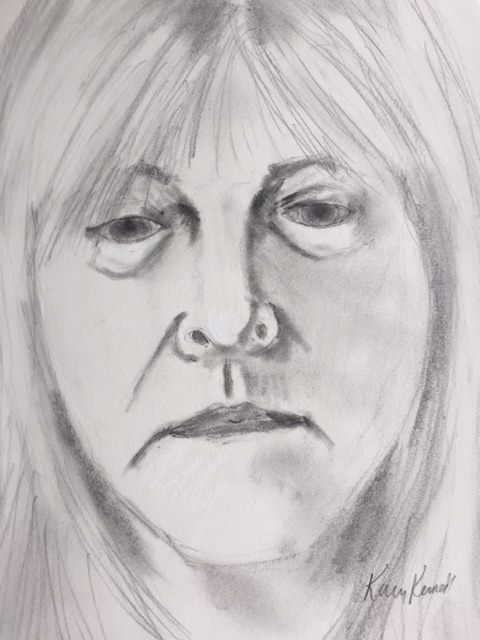 SURVIVORS OF PSYCHIATRIC DRUGS: THE FACES OF IATROGENIC HARM -- Karen (self-portrait drawing on paper by the talented artist Karen Kennedy).
Disclaimer: NEVER cold turkey a medication. Consult your doctor and do your own independent research when starting or discontinuing a medication.
I have invited other artists to help with this project since we have had so many requests for portraits. Hopefully we can paint/draw enough to publish a book with the stories at some point.
As an educational introduction to Karen's story, we'll talk about how drug metabolism changes with age and how meds that worked fine in young age can suddenly cause problems in the elderly. Thanks to Nicole for writing this introduction:
"Pharmacokinetics is best defined as what the body does to a drug; it includes: Absorption, distribution across body compartments, metabolism and excretion.
With aging, there are changes in all these areas. There is convincing evidence of increased pharmacodynamic response in the elderly which may be further accentuated by disease factors.