JOEL - SURVIVORS OF PSYCHIATRIC DRUGS: THE FACES OF IATROGENIC HARM 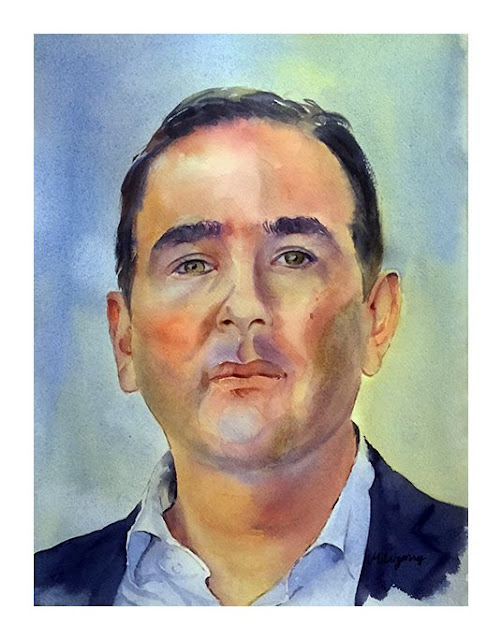 
"SURVIVORS OF PSYCHIATRIC DRUGS: THE FACES OF IATROGENIC HARM"--JOEL
Disclaimer: NEVER cold turkey a medication. Consult your doctor and do your own independent research when starting or discontinuing a medication.
Today's warrior is this brave and handsome father of two, Joel, from Mexico. I am fortunate to know him and have him share his story. This is a watercolor on paper (11"x14.5").

There is a misconception that only those who abuse psychiatric medications for long periods of time are harmed by them and that taking them as prescribed in the short-term is completely safe. However, Joel's story and many other stories show that these drugs can cause severe harm even to those who take them EXACTLY AS PRESCRIBED or even less frequently than prescribed and also for short periods of time.


A survivor of psych meds, Holly Hardmann, is working on the documentary "As Prescribed" specifically documenting the global benzodiazepine crisis and how so-called good patients who follow doctors directions and take their meds exactly as prescribed without abusing them, can be harmed by those meds that were supposed to help them. Unfortunately, no one wants to support this kind of documentary since it goes against mainstream psychiatry and pharma interests. So please, go visit their Facebook page at:
https://www.facebook.com/asprescribedfilm/?fref=ts

#bebrave #akathisia #iatrogenesis #warrior #pillsharm #coldturkeykills #survivor #pillskill #pillsdisable #pillsruinlives
==============================================
"My name is Joel. I am a 42 year old family man with my own business. I am also well known in my community. I consider myself blessed and lucky in many ways. Here is my story:
I was suffering from insomnia and visited a therapist highly recommended to me by my doctor. This therapist believed my insomnia was likely due to work related stress. At the end of the appointment, he told me to take this pill called Risperidone (Risperdal, an antipsychotic). He said it was harmless, and would help me with my daily business routine and make sleep possible. I remember him saying, “it is a baby dosage and won’t do any harm.” This pill worked really well for a month. I felt good.
I was able to sleep well and thought I had discovered a magic pill. Then, I began having minor episodes of depression, anxiety and rage. I had never had these before and began to worry that something was wrong. I went back to the therapist and he told me to take Fluoxetine (Prozac) along with the Risperidone. I followed his directions but started feeling even worse. When I told him this, he then gave me Alprazolam (Xanax) and another drug I cannot remember. I was now taking 4 pills and before all this began, I had never used pills before. In hindsight, when I was put on these pills, I had no new stress in my professional life that I wasn’t able to handle prior without medications.
I called the therapist and told him I was feeling badly, and he said it was me and I should take it easy! He also told me I could discontinue all the pills if I wanted to. Since they didn’t seem to be working, I listened to him and stopped the pills on a Friday. Within 8 hours of discontinuing the pills, I suffered my first panic attack at a restaurant with my family. My wife immediately drove me to the doctor who said this was NORMAL and just a middle age crisis. He injected me with 2mg of Valium, told me I was okay and sent me home.
I went to sleep and after a couple of hours all hell broke loose. I started having hallucinations, paranoia and felt totally out of my mind. I spent the weekend very sick and unable to eat or sleep. Food tasted like metals; noises made me afraid of my own shadow. On Monday, we visited him and he tried to put me in a mental hospital. I refused. He then reinstated me on 3 mg of Xanax daily, with Paxil and Alprazolam (Xanax) as needed. This did not work. He then increased the Xanax to 6 mg daily, and added Wellbutrin. I felt even worse.
I couldn’t handle it anymore and I discontinued most of the pills. I kept only one Xanax pill at night for two more weeks, but felt worse still. I then cold turkeyed (CT) the Xanax.
Going Cold turkey, I was now totally out of my mind, disabled, unable to work, drive or be by myself. I lost weight. I was a human train wreck. I thought this would last only a couple of weeks, or I would die.
My business suffered, costing me a lot of money. The only thing I could do was pace around my house due to the akathisia (agitation) and anxiety. I couldn’t be around people, even my parents. I also spent thousands of dollars on therapists trying to find the magic cure. None of them worked and only confused me more since no one had the right diagnosis. I was labeled OCD and co-dependent since no one recognized this as withdrawal. It was only after I began searching the internet that I discovered the videos on youtube. That was my life!
Once I discovered the Ashton Manual, I realized I was in withdrawal. It took me 14 more months of my life to heal and I had only taken those drugs for 3 MONTHS!! I suffered windows and waves and the whole package of symptoms. Thank God I am finally done with that nightmare. All the symptoms are gone. It was a very slow process. The first 8 months I couldn’t notice improvement, but then I started having windows and more hope. The last 2 months my windows got longer and my waves got smaller in intensity until it was gone!
It is incredible how much damage was done, but it is also incredible that our brains and body have the ability to heal all that damage. Withdrawal has probably been the hardest experience of my life, but I now understand it was only temporary. Long, but temporary. I have my life back. Life feels good again. I am exercising like never before, eat only healthy food and enjoy every minute of my new life! Healing happens. Please believe that and DON’T LET ANYONE TELL YOU ANY DIFFERENT!! Everyone heals sooner or later. I know that now.
-- Joel (Mexico)"
alle mercoledì, aprile 12, 2017