In The Name of Mental Health by Ron Leifer 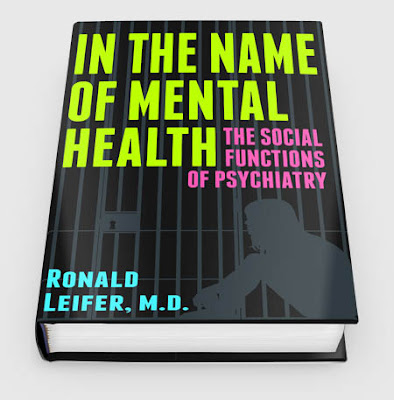 Ron Leifer’s out-of-print book, «In The Name of Mental Health» (1969), is now available again as a free eBook for download.
«In The Name of Mental Health» offers an indepth look into the social functions that psychiatry carries out on behalf of the state. Inspired by his teacher and mentor, Thomas Szasz, the author unravels the complex semantics that masquerad psychiatry’s true role, exposing step by step the founding myths of mental illness and psychiatry’s claim of being a branch of medicine, demonstrating that its sole purpose is exerting social control disguised as medical care—thus allowing governments based on the Rule of Law to repress dissent and social deviancy without overtly infrindging their constitution, and circumventing civil and human rights.
Ron Leifer guides the reader through the history of psychiatry, its terminology and core beliefs, analyzing each building block of the psychiatric enterprise and its ideology under the lenses of medicine, sociology and philosophy, showing the various historical forces, conflicts and interests that led to the medicalization of human behaviour and the institution of psychiatric social control—thus allowing the reader to fully understand the huge gap and contradictions between what psychiatrists claim to be doing and the reality of psychiatric practices outcome on everyday life.
«In The Name of Mental Health» is a book written for the benefit of all those who believe in mental health and psychiatric dogmas, it’s an eye-opener to the entangled outlook on life that psychiatry brought about, and a chance to set us free from its mystifying spell and regain insight into the real nature of existential problems, on how to deal with them and how to free psychology and psychoanalysis from the fallacy of the medical model.
You can download the ebook choosing between ePub and Mobipocket format—and read it offline in your eReader, smartphone, tablet or PC.
Digital edition by Tristano Ajmone, OISM Editions, August 2015.
a giovedì, marzo 09, 2017