Getting back to Bedlam! by Rufus May 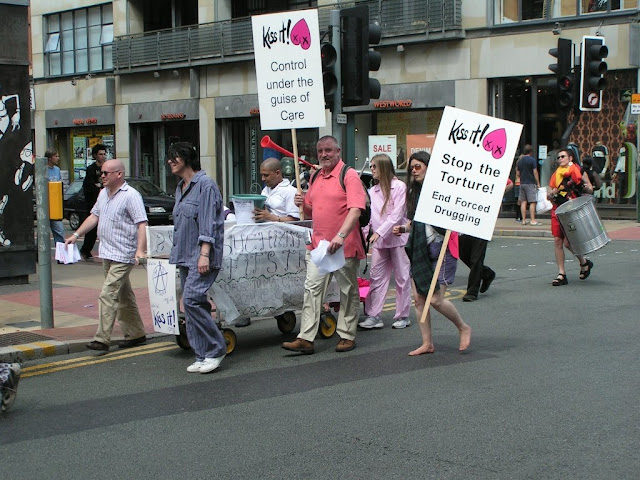 Having been diagnosed as schizophrenic at the age of 18, Bradford clinical psychologist Rufus May explains how he rebuilt his life and found his very own "mission impossible" in Bradford...
Escaping mental health services is a bit of a taboo subject but for me it was necessary for my recovery from mental health problems. At the age of eighteen I was told I had a serious mental illness called schizophrenia and that I would need to take strong drugs for the rest of my life. 21 years later I now work as a clinical psychologist and I have not taken any psychiatric medication for over 19 years.
I now work with people who hear voices, people who experience strong mood-swings and unusual ideas. I believe that if you go crazy, as I did, with the right support and effort your experiences can be made sense of and you can make a strong recovery.  If I am helping someone I am not interested in what diagnosis they have been given, I am interested in who they are, and what they have been through.  My personal experience, and that of helping others, has made me realise that while drugs can calm problems down in the short term, taken over a long term period they make someone’s health problems worse.  I have found people’s mental health problems make sense if you creatively and carefully understand their life stories.


When I was eleven, my mother had a brain haemorrhage.  A brain operation saved her life but left her mentally and physically disabled.  She eventually made a strong recovery through her own determination and the support of neighbours and friends. However, during my teenage years my mother and I argued consistently and I became less and less interested in my education, spending a lot more time hanging out on street corners.  Aged 15 I began smoking cannabis pretty heavily for a couple of years. At 17 I got a girlfriend and tried to focus on getting into advertising. However, a year later my girlfriend left me and I found myself in a dull career as an office junior in a small business. I began to escape more and more into a fantasy world which became more and more real. At first I felt I was getting messages from God that I was special and that I had a mission.  I wondered what my mission could be.  What if I was a trainee spy rather than an office junior, what if the packages I was being asked to deliver were top secret documents. As the ideas intensified I slept less and I began to hear messages warning me to be careful on the radio and television.

Dr Rufus May
Eventually I ended up in psychiatric hospital forced to take strong drugs that subdued me. This experience was very frightening and I vowed to challenge this accepted practice of forcing drugs on people. My parents were told I had schizophrenia and that drug treatment would need to be lifelong. I disagreed. I believe my breakdown, what they called schizophrenia, was a kind of grief reaction, that my fantasies and paranoia were fuelled by strong emotions that until then had been suppressed. I was upset by my girlfriend leaving me and I no longer felt I had a place in a world that seemed hostile and uncaring. My madness offered me a break from that reality. It also had the clues to my recovery. Like a spy, if I was to recover a meaningful role in society I would have to be creative and careful who I listened to.
I decided not to believe I had a lifelong brain disease but, instead, that I could rebuild my life. One close friend also believed in me and visited me almost daily when I was in hospital. Her friendship made a massive difference.
I also knew I had to learn how to express my emotions. I used drama, art and dance to do this.  When I came out of hospital I got a lucky break. My first part-time job involved walking each evening in the wooded grounds of Highgate cemetery as a security guard. Although it sounds scary, I think this was actually a very healing activity.  On two occasions I had tried to stop taking the medication due to the fact it made me feel emotionally blocked and too sleepy. I was not given any medical support to do this and I got very high and was re-hospitalised. However, the third time I tried I managed it. I used exercise and breathing exercises to maintain a calm attitude. I also started to avoid smoking cannabis and focused on helping others.
After my breakdown I felt I needed to change my approach to life and, that to be happy, I needed to help others and make a contribution to society.  I was unhappy about how I and my fellow patients were treated in psychiatric hospital and how many friends had also written me off.  I became determined to try and change this by training to be a psychologist in order to change professional and public attitudes to mental illness.  I came to Bradford to work four years ago as it has a reputation for a progressive approach to mental health.
So, in the end, I found my 'mission impossible', to help transform how we all respond to mental health problems. In my work with colleagues and volunteers I have created lots of self-help groups that focus on working towards recovery, growth and healing.  I have helped get holistic approaches like Tai Chi into the hospital where I work. I also organise public meetings and campaigns for more holistic approaches to mental health.
In 2005 we pushed a bed from Bradford to Manchester in pyjamas, chased by a giant syringe, and called it the Great Escape Bed Push.  We gained national radio, television and press coverage. In August 2006 we did a bed-push from Brighton to London to highlight the need for psychiatry to move forward in the way it treats people with mental health problems.
Find out more about this and what happened in 2007:
The Great Escape Bed Push
The BBC is not responsible for the content of external websites
alle giovedì, marzo 09, 2017