Torture and other ill-treatment in Italy by Amnesty International

Torture and other ill-treatment 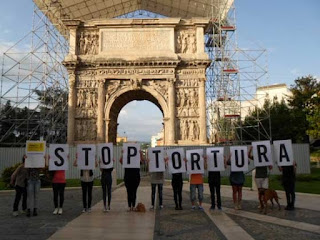 A bill to incorporate the crime of torture into national legislation initially passed one branch of Parliament in April, but failed to pass in the end. Similarly, the government failed to introduce identification tags on the uniforms of law enforcement officers that would facilitate accountability for abuse.
In April, the European Court of Human Rights found in the Cestaro case that police storming the Diaz school, Genoa, during the G8 summit in 2001, had committed torture against demonstrators sheltered therein. The Court underscored how no official had been convicted for such treatment, linked to the absence of the crime of torture within the domestic legislation, to the application of the statute of limitations, and to the lack of police co-operation.
A national ombudsperson for the rights of detainees was still due to become operational at the end of the year.
a giovedì, luglio 28, 2016