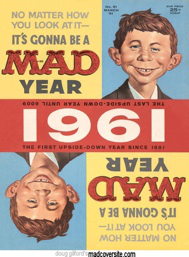 “1961 was a significant year in the history of psychiatry because it spawned a proliferation of critical books by psychiatrists, sociologists, and philosophers in both the United States and Europe—launching psychiatry into crisis.” (Pols, p. 16)
Call it a coincidence, but Mad Magazine was right: with the publication of The Myth of Mental Illness, the world turned upside down in 1961. The author of that book, Dr. Thomas Szasz (1920-2012), was one of the greatest thinkers and prose stylists of the last 100 years. Has it really been seven years since he died? It has, and enough time has passed that we can start to take stock of his legacy.


This important new collection of essays by former colleagues, psychiatrists, philosophers, and legal experts does just that.
I should make two disclosures before proceeding. First, the editors of this new book were colleagues of Szasz’s at SUNY Upstate Medical Center in Syracuse, New York, and they have hosted me in their speaker series several times. Second, theirs is the second book to examine Szasz’s legacy, and I contributed an essay to the first.
Of course, the editors make important disclosures of their own. First, as Dr. James Knoll remarks, psychiatry is “a hybrid profession of clinical science and humanities” (104). Second, as Dr. Haldipur states, “Szasz’s own writings are best read as philosophy rather than as psychiatry. . . . His true métier was that of a philosopher rather than of a psychiatrist” (278). This explains why I, a professor of Classics—a branch of the humanities, including philosophy—venture to review a book dedicated to an appraisal of Szasz’s legacy.
What is that legacy? In a 1998 manifesto, Szasz himself put it the following way:
Szasz undergirded these six contentions with an enormous apparatus of books, articles, and media appearances. How do they hold up under scrutiny?
Readers familiar with The Myth of Mental Illness will recognize the first point as his main contention there (it is accurately summarized by Church’s essay here). And on the evidence of this book, I can only conclude it emerges brighter and more solid than before. The authors all concede the point either implicitly or explicitly. For example, in 1994 Dr. Allen Frances led the group that revised the DSM, the official book of psychiatric diagnoses. In 2019, however, Dr. Frances writes (171): “I agree completely with Szasz that mental disorders are not diseases and that treating them as such can sometimes have noxious legal consequences.” And although they will disagree, other authors implicitly concede the point by simply contesting the definition of disease or health (Wilson, Pies, Torrey). But since Szasz had always defined those words in biological terms, contesting his premise simply changes the debate rather than resolves it.
The second five points all relate to Szasz’s policy ideas. Most chapters in this book engage with them in one form or another, and several are devoted to them exclusively:
Suffice it to say that most authors shrink from Szasz’s commitment to libertarianism and the utopian schemes that cold creed tends to dream up.
Other essays provide absorbing context to the development of Szasz’s thought or rhetorical strategies (Pols, v.d. Luft, Radden), or they extend Szasz’s legacy by looking at “psychopathy” (which, to my surprise, is not considered a mental illness) (Ciaccio). Still others, such as Sadler, examine the relationship between mental illnesses and value judgments; and since, in my view, Szasz’s greatest books—The Theology of Medicine, The Manufacture of Madness, and Coercion as Cure—hew closely to this theme, I would have liked to see more along these lines.
The six points Szasz himself enumerated, however, are not the only points the editors consider part of Szasz’s legacy. As Haldipur emphasizes in an important epilogue, Szasz’s writings did play some role in deinstitutionalization, and Szasz himself succumbed to the unethical temptation of retroactive diagnosis on at least one occasion (viz. in his 2006 book on Virginia Woolf).
Surely the most maddening aspect of Szasz’s legacy, however, was his decision to partner with Scientology to achieve his policy ambitions. That decision continues to confuse many people, but aside from one nod to it by Haldipur and another by Torrey, no one chose to kick that hornet’s nest. Someone should. As Torrey notes, “Szasz’s association with Scientology has probably done more to undermine his reputation, and thus lose the benefit of his many useful ideas, than any other factor” (101). I agree.
Silver tarnishes in your china cabinet, whereas scouring and buffing restores its gleam. The editors’ decision to take that approach in this collection—tough love, not unconditional love—makes Thomas Szasz: an appraisal of his legacy an important assessment of his thought. It deserves to be read, discussed, and debated widely.
alle lunedì, luglio 29, 2019