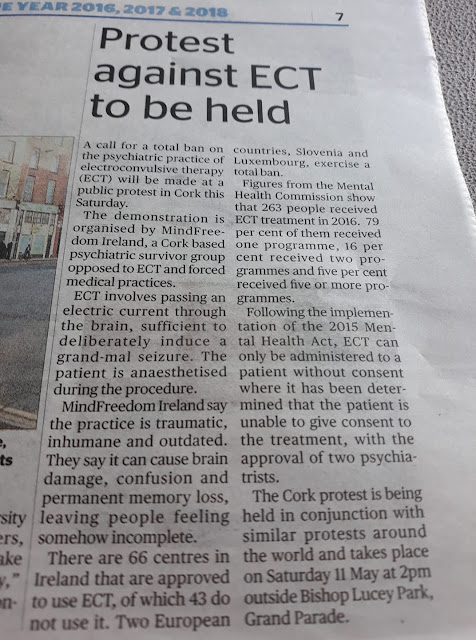 A ‘dehumanising and outdated’ procedure is how the controversial administration of electroshock was described at a public protest in Cork on Saturday.

Electroshock involves passing an electric current through the brain, sufficient to cause a grand mal seizure. While its advocates say the person is anaesthetised and also claim it is unethical not to give it as a ‘safe and effective’ last resort, opponents say it is extremely traumatic for already vulnerable people, lacks scientific credibility and frequently causes damaging permanent memory loss.

The protest heard from one grandmother who said she was given electroshock just 3 days after the birth of her daughter and to this day has no memory of the event.
The latest figures from The Mental Health Commission show that 2558 individual shocks were administered in Ireland in 2016. Two-thirds of the recipients were women, many of them elderly.

Another speaker challenged the view that it was ‘safe and effective’ as claimed by the Irish College of Psychiatry and that deliberately triggering a seizure violated the Hippocratic Oath to First Do No Harm.

It was also stated that though the word ‘unwilling’ had been removed from Section 59b of the Mental Health Act, 2001, the word ‘unable ‘ remains, in effect still allowing for electroshock to be given on the say-so of two psychiatrists.
The annual protest which began in 2006 was organised by MindFreedom Ireland, a Cork-based psychiatric survivor group which campaigns to highlight the human rights abuses inherent in current Irish psychiatric practice and upheld by the Mental Health Act.
Photo attached.
END.
Jim Maddock,
MindFreedom Ireland,
Cork.
Ph: 021 4894303. Mob: 086 0624445.
12th May, 2019.
a venerdì, maggio 24, 2019