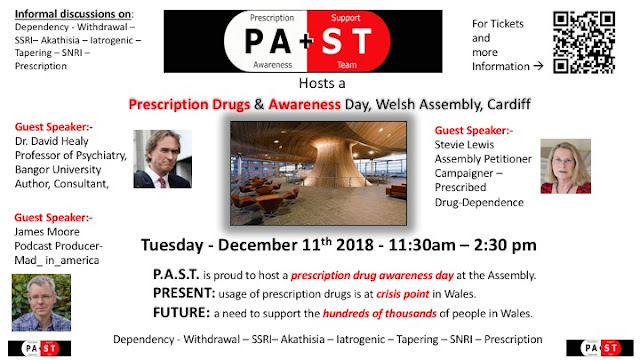 Last week a seminar on dependence on and withdrawal from antidepressants took place in the Welsh Senedd, overlooking Cardiff Bay.


It was the initiative of and organised by Aled Jones of Prescription Drug Awareness, Support and Treatment, under the auspices of Mark Drakeford – the First Minister. The Senedd building was a stunning setting for the event.

One of the key speakers was Stevie Lewis who has organised a petition to the Welsh Assembly on the issue of dependence on antidepressants, complementing a comparable petition organised by Marion Brown in Scotland. Both petitions are feeding into a review of prescription drug dependence being conducted by Public Health England.

The final speaker was James Moore who with his podcast Let’s Talk about Withdrawal has emerged as a leading figure globally on the question of antidepressant dependence. His central role in this debate may have something to do with having a keen eye for a political opportunity – he realised that if the proceedings were recorded they could be disseminated far and wide. If this truth about antidepressants gets around the globe with even a fraction of the speed the lies have circulated, a great deal of good may come from his and Aled Jones’ efforts.

The three talks, introduced by Aled are here:


James will run a more detailed account of the day and its issues on his Mad in America slot.
The text of my talk is HERE and its accompanying slides HERE.
alle domenica, dicembre 23, 2018