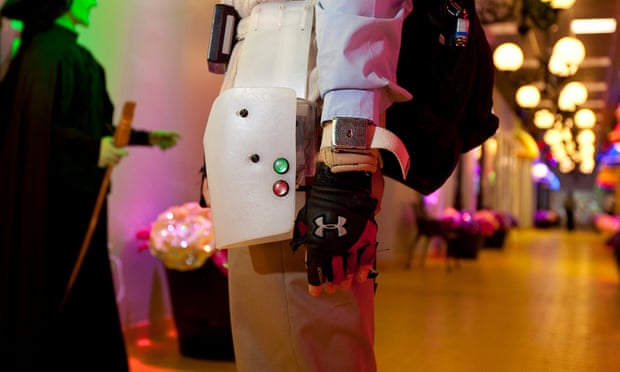 An international body entrusted with upholding human rights across the Americas has called for an immediate ban on the controversial use of electric shocks on severely disabled children in a school outside Boston.

The Judge Rotenberg Center in Canton, Massachusetts, is believed to be the only school in the world that routinely inflicts high-powered electric shocks as a form of punishment on vulnerable children and adults. About 47 of its students are currently subjected to the “treatment”, which involves individuals being zapped with electric currents far more powerful than those discharged by stun guns.

'It's torture': critics step up bid to stop US school using electric shocks on children.

Disability rights campaigners have tried for decades to stop the practice, which the school’s administrators call “aversive therapy”. So far the institution has managed to fend off all opposition, arguing that electric shocks are an acceptable way of discouraging harmful habits.

Now the Inter-American Commission on Human Rights (IACHR) has issued a rare formal notice known as “precautionary measures” that calls for immediate cessation of the electric shocks.

In a seven-page resolution, the Washington-based panel says that the practice poses a “serious impact on the rights” of the vulnerable children at the school, “particularly on their right to personal integrity which may be subjected to a form of torture”.
Advertisement

The commission cites the work in 2013 of the then UN monitor on torture, Juan Méndez, who found JRC’s electric shock technique was a potential violation of the UN convention against torture and other international laws. It also notes several federal agencies and professional groups have called for a ban on “aversive techniques” on grounds they can cause psychological trauma.

The commission’s intervention was prompted by a petition from a coalition of advocacy groups led by Disability Rights International. DRI’s president, Laurie Ahern, told the Guardian the commission’s new call for a ban added to a growing body of opinion that the electric shocks amounted to a form of torture.

“The idea of using electric shocks to torture children has been recognized as unconscionable around the world – the US government has got to respond to this and put a stop to it,” Ahern said.

JRC responded to the call for a ban from the IACHR by insisting it was based on inaccurate information. “No one from the JRC or the families of clients whose lives have been saved by the treatment were interviewed and there has been no response to multiple invitations to visit the school.”

In a statement to the Guardian, the school said the electric shock devices presented no serious risk to children. “The clients are generally free of restraint and ineffective and dangerous psychotropic medications, free of injuries and able to further their education and relationships with their families in ways that were not possible with any other treatments.”

The center also pointed to the ruling in June of a family court judge who found that the activities of the center were legal and must be allowed to continue.

In 2010 the Guardian was allowed rare media access to the JRC’s premises. The school’s founder, Matthew Israel, told this newspaper how he was inspired to come up with the idea of aversive therapy having read a utopian novel called Walden Two which imagined a perfect world in which children were trained to act positively and discouraged from acting negatively.

From those beginnings he developed the idea of using electric shocks on troubled children, going on to develop his own special zapping devices known as “GED” machines that the students carry in backpacks worn around the clock. Wires run from the boxes to electrodes attached to the skin of the students’ arms, legs or torsos.

When the kids attempt to carry out behavior deemed by the school authorities to be harmful to themselves or others, they are given a shock lasting up to two seconds. The punishment is meted out by staff operating remote controls.

Over the years the school has been at the center of a number of scandals. In 2007 staff at the center inflicted almost 100 electric shocks on two boys in their care after receiving a phone call purportedly from a senior manager saying the students had misbehaved. The call was later discovered to have been made by a hoaxer.

In the fallout from that scandal, Israel was forced to resign as head of the school. He served five years on probation after he was found guilty of destroying evidence.

A civil trial related to that case led to a video being released to the public that showed Andre McCollins, a student aged 18, being shocked 31 times over seven hours as he was strapped on a gurney. He can be heard screaming: “That hurts, that hurts.”


The IACHR is part of the Organization of American States (OAS), of which the US is one of the 35 independent member states. As part of its call for the end to electric shock treatment at JRC, the commission has requested that the Trump administration itself takes action to suspend the practice immediately.

The commission wrote last month wrote to the US secretary of state, Mike Pompeo, and US ambassador to the OAS, Carlos Trujillo, asking for their observations on the electric shock therapy. So far the IACHR has received no response.

In its resolution the IACHR gives the Trump administration 15 days to impose a ban on the practice in line with the commission’s findings. Though the call for a prohibition is non-binding, for a member state of the OAS to willfully ignore the call of its human rights arm would open the US to international condemnation.

The US government has full power to order a ban should it choose to. The Food and Drug Administration (FDA), which regulates all medical and therapeutic devices, could pull the GED electric shock machine by ruling it illegal.

In 2016 the FDA did indeed say it was minded to prohibit the device, but it has yet to turn the proposal into action.
alle venerdì, dicembre 21, 2018