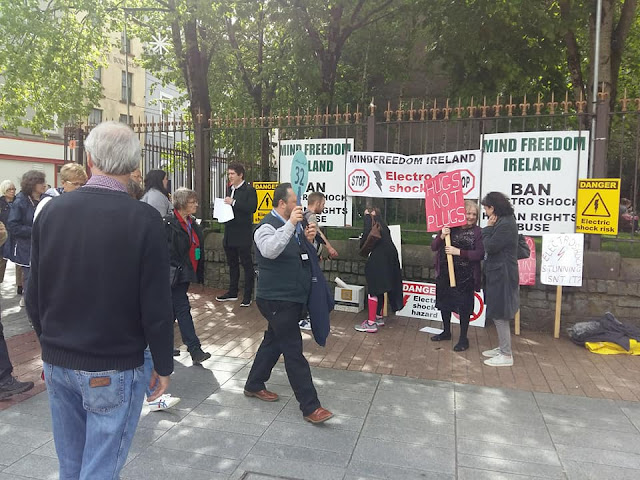 For the 11th year running, yet another public protest against the psychiatric procedure of electroshock took place on The Grand Parade, Cork on Saturday.

During the procedure, an electric current is passed through the brain of an anaesthetised person to deliberately induce a grand mal seizure.
Psychiatrists defend the practice by claiming it is beneficial for severely depressed people who have not responded to drug ‘treatment’.Recent figures indicate that almost 250 people are electroshocked in Ireland every year. Two thirds of them are women and many are elderly.

The Saturday protest heard testimony from people who said that rather than helping them, they endured lasting memory loss and brain damage leaving them with reduced cognitive capacity.
One grandmother spoke of how, after being electroshocked 3 days after the birth of her child, she still has no recollection of the event.
Another speaker put the use of the procedure in the wider context of psychiatry’s belief in a bio-medical model of people with broken brains which can be ‘fixed’ by a surge of electricity. A more humane and empathetic approach was required, he said.
While a recent amendment to the Mental Health Act removed the word ‘unwilling’ in relation to people not wanting the procedure, it left intact the word ‘unable’ which, in effect, still leaves the decision in the hands of two psychiatrists. Furthermore, the Act also allows for the overruling of any Advance Directive in which a person has stated they did not want the procedure.
The protest was organised by MIndFreedom Ireland, a Cork based psychiatric survivor group which campaigns against the abuse of human rights in psychiatry and is opposed to forced ‘treatments’ including forced drugging and electroshock.
It was part of a wider International Day of Protest Against Electroshock on May 12th which saw similar protests in several countries around the world.