What Does It Mean To Be Called “Crazy” in A Crazy World? 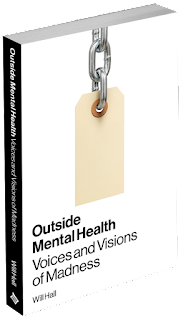 Outside Mental Health: Voices and Visions of Madness reveals the human side of mental illness. In this remarkable collection of interviews and essays, therapist, Madness Radio host, and schizophrenia survivor Will Hall asks, “What does it mean to be called crazy in a crazy world?”
More than 60 voices of psychiatric patients, scientists, journalists, doctors, activists, and artists create a vital new conversation about empowering the human spirit. Outside Mental Health invites us to rethink what we know about bipolar, psychosis, schizophrenia, depression, medications, and mental illness in society.