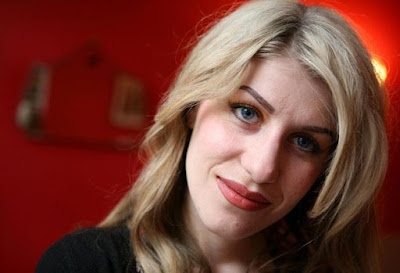 Eleanor Longden was revising for her final university exams in May when she was interrupted by a hostile middle-aged man, who barked: "Stop! You can't do this; you're going to fail. You're not good enough to get a degree." Nine other people joined his tirade in a chorus of noisy abuse as Ms Longden, 27, tried to concentrate on studying.
"You know what?" she replied. "You're right: I do need to stop for a break. Thanks for reminding me."


Ms Longden has been hearing the same critical, often menacing, internal voices for about 10 years. Every day, the dominant male speaks to her in an authoritative tone. The others back him up and the messages are always the same: you're not good enough; why bother with anything when you're such a failure? Except that she is not. She recently graduated from Leeds University with a first-class honours degree in psychology, the highest ever awarded by the department. She now works part-time with people who are hearing voices and is preparing for her PhD next year.


But it has been a long, hard struggle to where she is now. The psychiatrists and mental health nurses Ms Longden first encountered agreed with her voices. She was diagnosed with schizophrenia, forced to take high doses of powerful medication and written off as a hopeless case.


"My family mourned me as if I were dead," said Ms Longden, from Bradford. "They were told that I had a degenerative brain disease and they should prepare themselves for the worst as I might end up in a care home. I was told there was no hope, that there was nothing I could do apart from take medication." How did she go from a hopeless, mentally ill patient to a brilliant academic? A new wonder drug? A lobotomy? Years of therapy?


It was much simpler than that. She was referred to a consultant psychiatrist, Dr Pat Bracken, who encouraged her to listen to her voices and try to understand what they meant. He helped her to reduce her medication so that she could think more clearly. Slowly she worked out the connection between previous traumatic experiences and the messages the voices communicate. She also discovered her voices were worse when she was stressed. "This was the first time anyone in the psychiatric system had talked about recovery. Before that I'd been labelled, medicated and left; my past didn't matter and I had no future."


Yet between 4 and 10 per cent of the population hear voices and fewer than half of these people ever see a psychiatrist, according to research by the Hearing Voices Network. Between 70 to 90 per cent of voice-hearers do so after traumatic experiences.


Voices can be heard in the head, through the ears or through the environment. Conventional psychiatry tries to eradicate them using medication. But a growing number of critical psychiatrists, psychologists and voice-hearers try to listen, understand and accept them.


Dr Bracken, the director of mental health services in West Cork, Ireland, said: "As professionals we need to help people who are depressed or dominated by voices to find a path out of that state. That could be through medication, therapy, religion or creativity. It is completely wrong to try to use one template for everyone."


Ms Longden now has an agreement with her voices to listen and respond to them at 8pm for half an hour. If they come earlier she reminds them of the agreement. It works. She hears menacing voices every day, but fits them into her busy life. Talking to them hasn't made them worse. Stopping her medication hasn't made her dangerous. Yet some psychiatrists would section her and force her to take medication.


She said: "My original psychiatrist told me I would have been better off with cancer because it was easier to cure. She still says that to people. What happened to me was catastrophic, and I survived only because of luck. If I had lived one street to the right, I wouldn't have been referred to Pat Bracken. That can't be how people's lives are determined. I'm not anti-medication; I'm pro-choice. Hearing voices is like left-handedness; it's a human variation, not open to cure, just coping."
alle domenica, maggio 29, 2016