In Italy, we don’t have a law against torture - Campaign for absolute prohibition of Commitment and Forced Treatment


In Italy, we don’t have a law against torture 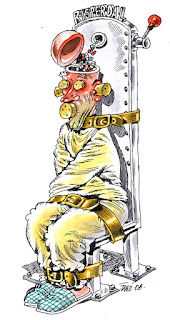 In Italy, the situation in the psychiatric field, with almost no exception, has worsened from the period of questioning psychiatric institution, in the beginning of the sixties. Then, Italy has been at the forefront of the closure of mental hospitals. Not only Giorgio Antonucci, Franco Basaglia and many professionals, but also a good part of the common people, realized that psychiatric hospitals were not places of care. Civil society, then, was sensitive to the issue of smash-down asylum culture. Publications appeared, there was an open debate, workers and students organized themselves and entered in asylums to see the conditions in which their fellow citizens were locked up. They protested and denounced the deplorable conditions the internees were forced to live in.


However,  since several years, we observe a re-institutionalisation process and, at the same time, in some Italian hospital’s psychiatric wards happened many deplorable facts, due to forced treatment, institutionalization and forced restraint. Some of these facts have become infamous after that committees and relatives have asked for justice, as in the case of the well liked teacher Francesco Mastrogiovanni, 58 years old, that was debated also on national television channels. Franco Mastrogiovanni, after a forced psychiatric treatment the 4th August 2009, (because of a road traffic offense: circulation, at night, on a street closed to traffic), has been heavily sedated, tied to the bed of Vallo della Lucania’s hospital psychiatric ward, and left to die after four days of abandonment. During the 80 hours hospitalization he was nourished only with saline solutions; he was tied hands and feet to the bed, in such a position that his respiratory functions where compromised, and he was sedated with high doses of psychiatric drugs, without supervision from the staff. At wrists and ankles there are 4 cm wide grazes. A hidden camera recorded everything; the video is of public domain. At the trial the responsible physicians were found guilty and sentenced to 3 and 4 years detention, that, with the mitigating clauses, they won’t have to serve. The 12 nurses were acquitted because “they obeyed an order”. The Committee truth and justice for Francesco Mastrogiovanni, asks for truth and justice. Watch  also the film 87 ore (87 hours), gli ultimi giorni di Francesco Mastrogiovanni (Francesco Mastrogiovanni’s the last days)  by Costanza Quadriglio.

In Italy some deaths due to forced hospitalization and/or prolonged or short-time use of mechanical and chemical restraint have been reported by the press, television and network (this mean that there are a lot of other such “incidents”, we don’t know):

27 October 2005: Riccardo Rasman dies during a coercive treatment by the policemen, for a hospitalization against his will, in a psychiatric ward in Trieste.

21 June 2006: Giseppe Casu, guilty of having wanted to pursue his peddler job in the village square, dies in a psychiatric ward in the hospital “Santissima Trinità” of Cagliari, as a consequence of a thromboembolism, after a forced hospitalization and having been heavily sedated. He was tied hands and feet to the bed, for 7 days and was sedated with high doses of psychiatric drugs against his will.

28 August 2006: A.S., the 17th of August 2006 is admitted to the psychiatric ward in Palermo, for medical investigations. A.S. died after 2 days coma, the 28th of August, probably for excessive doses of psychiatric drugs.

26 May 2007: Edmond Idehen a 38 years old Nigerian man, went voluntarily into the psychiatric ward of Bologna’s hospital “Istituto Psichiatrico Ottonello – Ospedale Maggiore Bologna”. As he tried to leave the hospital, because he did not feel cared, the doctors forced him to stay, with the help of policemen. Edmond Idehen died as a consequence of a hearth attack while nurses and policemen held him down. He was also strongly sedated with psychiatric drugs.

12 June 2006: Roberto Melino, 24 years old, dies for a hearth attack; he entered voluntarily the psychiatric ward of Empoli’s “San Giuseppe” hospital. As he tried to leave the hospital, he was forced to stay by the doctors, and obliged to take high doses of psychiatric drugs, in spite of his evident and serious breath difficulties.

15 June 2008: Giuseppe Uva, 43 years old, was brought inside a police station, because he was driving in state of high alcoholic level. There he was subjected to ill-treatments. After 3 hours he was forced to an obligatory hospitalization in the Varese’s “Circolo” hospital and was forced to take psychiatric drugs. He died because of the stress provoked by the mix of alcohol and psychiatric drugs.

30 August 2010: Lauretana La Coca, 32 years old, entered voluntarily in Termini Imerese’s “Salvatore Cimino” hospital. After 10 days of hospitalization her condition got worse, till she got into a comatose state and died.

Giuseppe D.: A man, more than 70 years old, was interned in Reggio Emilia’s psychiatric prison. His problem was that the neighbour’s daughter is a psychiatrist. His lawyer took a legal action to the European Court of human Rights, but until now there has been no answer, so the Pisa’s student group “Collettivo Antipsichiatrico Artaud”, together with “Telefono viola” from Milan, decided to release the documentation relating to this case in Internet, according with Giuseppe D.’s will, his lawyer, and his relatives.

2 April 2010: Eric Beamont, 37 years old, the 2 April 2010 was hospitalized in Lamezia. After 2 days he entered coma, so the doctors transferred him to the Catanzaro’s “Pugliese – Ciaccio” hospital, where he died. There is the suspect that the death of Eric was caused from a high dose of benzodiazepine. Diagnosis was: subarachnoid hemorrhage[i]

28 May 2015 Massimiliano Malzone died during a forced treatment.

Unfortunately in this article we have not described isolated occurrences, but an emblematic situation of violation of human rights in the Italian psychiatric institutions.
These are just some of the “incidents” that came to the limelight, but many more of them are not known when they happen, because, for example, people who live in loneliness are involved, or people whose relatives have given their consent, or simply when people want to get rid of a person perceived as annoying. We The Mad Hatter Association, constantly of forced psychiatric treatments, during which treated people suffer heavy damages. Forced treatments are often made on request of relatives, when patients refuse to take any longer the psychiatric drugs, or when their behaviour is perceived as disturbing. A friend of us (I.M.) tried to escape, but he was chased and filled with drugs; shortly after he was found dead at the bottom of a ravine. He was 40 years old. Another friend (A.S.) was walking on a path between fields and was stopped by police, because he was known as a “mentally ill” person. Then they called the psychiatrist on duty and told him: “He was walking near the railway and could possibly have in mind to commit suicide”; so they locked him up. I know this person, who often walks in the fields, where, however, it’s easy to be located near the railway, because of the constitution of the territory. He had never the intention of committing suicide. Another acquaintance of us died, throwing himself under a train, terrified by the fact that his mother, according to the psychiatrist, would refer to forced psychiatric treatment for him. Another one (U.S.) has suffered of heavy harassment, after having reported his superior’s embezzlement, noticed during his duties as a municipal technician. He was subjected to forced psychiatric treatment, kidnapped by police in riot gear. While he was sleeping, his door was smashed down, and he was thrown on the ground face down and handcuffed. He says that at least they could have tried to open the door, which was not locked. Now he is terrified and he even fears the dark; he is forced to take psychiatric drugs.
We can not think of de-institutionalization before we have dismissed the rules that allow forced psychiatric treatment, that allow to hold a person against his will, without having committed any crime, without the right to an equitable process, based on the alleged dangerousness and only because this person was diagnosed with a mental illness.
The so called “Basaglia law” the law nr. 180 from 13.5.1978, then joined and actually regulated by Law 833/1978 articles 33, 34, 35, 64, establishes the “Accertamenti e Trattamenti sanitari volontari e obbligatori” (“Forced health verifications and treatments”). In 1978 the law nr. 180 imposed the asylums’ closure, and the elimination of dangerousness or/and public scandal as criterion for forced treatment. But in the most Italian province, asylums didn’t close. So it was necessary to make another law, (because these asylums were too expensive), the law n. 724 from 23.12.1994, art. 3 paragraph 5, which dispose that these asylums had to be closed within the 31.12.1996; again disregarded, differed until the end of 1999. In 1996 the asylum inmates in Italy were 11.516 in 62 public asylums and 4.752 in private asylums.
According to this art. 180 law, forced treatment and included forced hospitalization, are possible if there are the following conditions: 1) a person “suffering mental illness” requires urgent medical treatment; 2) refuse the treatment; 3) it’s not possible to take adequate measures outside the hospitals. Forced treatments has a maximum duration of seven days, but can be renewed if necessary and then extended if it persists for a reasoned clinical need (it’s not an exception that the duration is extended for months and years). For forced treatments and the consequently limitation of personal freedom, there must be a request signed by two physicians, an administrative validation from the Mayor is required, followed by the validation of a judicial review by the Tutelary Judge.
Legislation of forced psychiatric treatment provides ample scope for arbitrariness and it is in strong contrast to the human rights regulations, that aim at preserving even people with disabilities from inhuman and degrading treatments. For those who commit a crime, it is expected that the judicial authority, within certain specific procedural rules, sanctions or imposes restrictive measures. We constantly deal with innocent  people in forced psychiatric treatment, who can no longer find a way out of the psychiatric institution.

“I have to confess”, said a psychiatrist, “to have a person completely in my power, made me feel a kind of sadistic shiver”.

In Italy the CRPD was ratified in 2009, but just at now we have not a law against torture, torture is not a crime, torture is not forbidden in Italy. So, those who torture does not violate the law. In the meantime a lot of intermediate psychiatric institutions (also called little asylums) were built. They are public or private and reimbursed from the State. A very great business is behind. Some other examples: Lazio Region President Polverini’s decree on Lazio hospital system: the number of beds in Psychiatric Institutions raise from 369 up to 629; more 70%. 50 beds for the public structure and 210 for the private structure trigger the chronicization circuit.
260 beds = 90.000 life days subtracted to the people at the cost of 10.000.000 €.
Didn’t the Basaglia Law foresee the closing up of madhouses?

-      Professor Antonucci, what is, to date, the status of implementation of the law 180?
- Apart from some single exceptional case, what proposed Franco Basaglia is not realized, but it continues a job that Basaglia obviously would not approve: authoritarian interventions, taking people by force and bring it in psychiatric clinics, which are the continuation of the asylum. The asylum was established by the authoritarian intervention: I take a person against his will, then I submit her to a series of forced interventions, which are the essence of the mental hospital”. (http://www.psicoterapia.it)